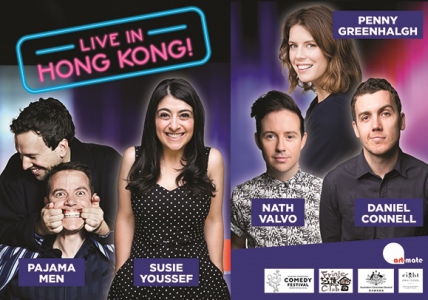 
Australia’s biggest comedy festival is coming back to Hong Kong!

Get ready, Hong Kong! The Melbourne International Comedy Festival Roadshow is back, coming to you with the freshest and funniest from Australia’s largest comedy festival! Featuring a huge cast of Australian and international star performers we’ve got all the comedy bases covered. These witty and wonderful artists have been handpicked by the Melbourne Comedy Festival to bring to you seven unforgettable nights of stand-up, sketch, slapstick and silliness. So get your tickets, grab your friends and get giggling as Australia’s ultimate comedy convoy hits the Hong Kong Fringe Club!

On the line up this year:

Pajama Men (USA)
World-renowned sketch superstars the Pajama Men take audiences to fun and fantastical places with bizarre and inventive comedy. This American duo is one-of-a-kind, often recognised by both peers and audiences as kings of improvisation. Surreal and spontaneous, they’ve won awards worldwide including the coveted ‘Barry Award’ for Most Outstanding show at the Melbourne International Comedy Festival.

Nath Valvo
Nath Valvo is razor-sharp, unique and relatable, winning over crowds and critics alike with tales of suburban family life, love and growing up in the ‘90s. Over his career Nath has performed to huge crowds at festivals around Australia, appeared across prime time television and radio and had hit solo shows in Australia and the UK, where his debut season at the Edinburgh Festival Fringe scored him a ‘Best Newcomer’ nomination. Nath creates hilarious stories out of the everyday - from supermarkets to his hatred of cats.

Susie Youssef
Susie Youssef is a comedian, actor, writer and improviser, starring on Australia television in programs such as ‘Whose Line Is It Anyway Australia’. She has written and performed comedy for stage, radio and television around the world and regularly performs at renowned Festivals and clubs in Australia and the UK. With a warm and engaging style, you can’t help but love Susie on stage as she creates wonderful worlds through inventive stand-up and character comedy.

Daniel Connell
Daniel Connell could easily be described as the classic Aussie comedian; affable and loveable with a relaxed and hilarious style. His dry, observational humour often takes you by surprise, with punchlines creeping up and leaving you in stitches. Daniel has shared stages with the kingpins of the Australian comedy scene and now delights avid audiences in his solo shows around the country.

Penny Greenhalgh
High energy and a little left-of-centre, Penny Greenhalgh is a physical comedy dynamo. Expect surreal scenarios laden with slapstick as Penny takes you on a journey that is mad-cap and furiously funny, with audience participation a must! She’s awesome and unpredictable, winning awards around Australia for her ambitious and imaginative comedy. Strap yourself in for a wild ride into Penny’s world!