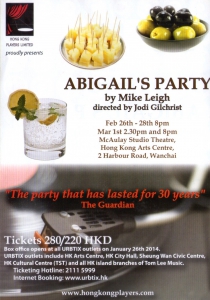 Welcome to the world of Beverly – possibly the original “Essex girl” – who is having some neighbours over to her suburban semi for a bit of a do. As well as Bev’s much put-upon husband Laurence, the guests are married couple Ange and Tone, and neighbour Susan, who’s only here to escape her punk daughter Abigail’s party. It’s a very small gathering, which might make for a cosy affair, but which also means there’s nowhere to hide.

Mike Leigh’s award-winning 1977 play is by turns hilarious and excruciating as it mercilessly sends up the aspirations of England’s new middle class. It gained cult status when it first came out and remains a perennial favourite. Under the inspired direction of Jodi Gilchrist (The Graduate, Pride & Prejudice), Abigail’s Party is guaranteed to bring both a grin and a grimace to your face.