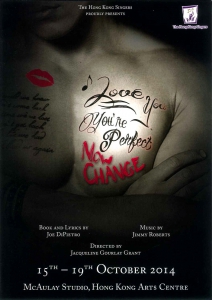 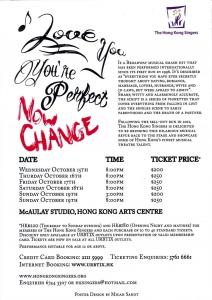 I Love You, You're Perfect, Now ChangeThe Hong Kong Singers

I Love You, You’re Perfect, Now Change is a Broadway musical smash hit that has been performed internationally since its first run in 1996. It’s described as “everything you have ever secretly thought about dating, romance, marriage, lovers, husbands, wives and in-laws, but were afraid to admit”. Sharp, witty and alarmingly accurate, the script is a series of vignettes that cover everything from falling in lust and the singles scene to early parenthood and the death of a partner.
Following the sell-out run in 2011, The Hong Kong Singers is delighted to be bringing this hilarious musical revue back to the stage and showcase some of Hong Kong’s finest musical theatre talent.