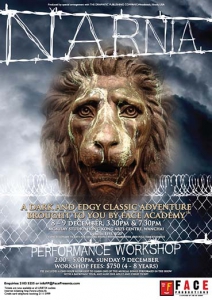 It is 1940 and four evacuee children escape to the country to flee the damage and desolation of war-torn London and the violent struggle that is raging throughout Europe. They safely arrive at their eccentric uncle's residence in the country, the mysterious and eery Marbleton Manor. In amongst the building's labyrinth of corridors and rooms they stumble across an old wardrobe, and soon discover that this new-found hiding place is actually a magical portal to another world – the kingdom of Narnia. The children are soon thrown into the centre of another battle between the forces of good and evil and discover that they are at the heart of an ancient prophecy, foretelling the liberation of Narnia and its people. In order to fulfill the prophecy, they must first defeat the evil White Witch and her minious whose frosty grasp holds Narnia and its people in a perpetual winter. Only with the help of the majestical lion Aslan, some ‘deep magic’, and a rebellious army of downtrodden creatures can they fulfill the prophecy, restore freedom, and return themselves home to their own world.