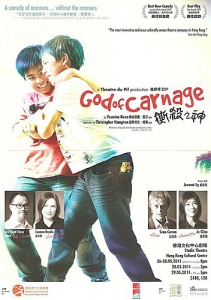 Canadian director Jovanni Sy (Blackbird and Antigone) returns to Theatre du Pif for the third time to direct this award winning comedy of bad manners. Two sets of parents meet to resolve a conflict between their two children but what is supposed to be a civilized meeting turns into a barrage of name calling, tantrums and tears. In this hilarious comedy when the gloves come off, dirty laundry is aired and the evening soon escalates into all-out war.

Yasmina Reza’s brutally funny satire has proved to be the must-see play throughout the world, with sold out seasons in the West End and on Broadway. It has won numerous awards including Tony Awards for Best Play and the Laurence Olivier Awards for Best New Comedy.