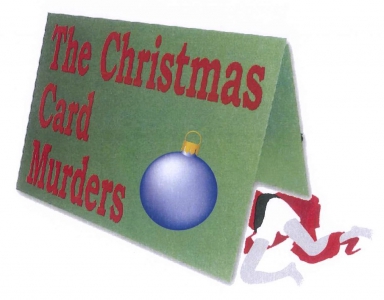 It is the week before Christmas and Inspector Tong is getting very worried. He keeps receiving Christmas Cards that announce the deaths of prominent Hong Kong celebrities.

There was the first card that claimed that Dolores Day, owner of the popular Americana Nightclub, would never be able to sing another White Christmas. Then came the card telling him that Bernard Russell, the celebrated economist and journalist would be spending his last dime by the time he’d finished his Christmas dinner. The T.V. duo Roger and Julie wont make it in front of the cameras for their Christmas Eve special and celebrity cook, Mai Mai Chow Fat, wont get to launch her special Stir Fry Christmas Crackers.

The latest, and most peculiar Christmas Card, announced that movie director, Romala Potanski, would be shooting her own death from the top of a Christmas tree.

Inspector Tong has been told by the Police Commissioner that he has to - DO SOMETHING FAST! So he’s called them all together at Dolores’ nightclub to warn them about the Christmas Card death threats. But now he’s worried. Perhaps this is exactly what the killer has been waiting for – all his prey together in one room.