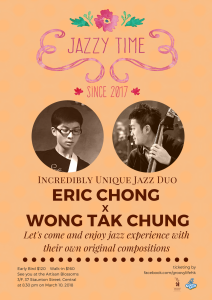 Let's come and enjoy jazz experience with their own composition.

Eric Chong
Eric Chong is a guitarist from Hong Kong, He played pipa in the chinese orchestra when he was in secondary school. Then he learn acoustic guitar at the age of 15. Then shifting to electric guitar after he was introduced to jazz by his teacher. In Hong Kong, he played in Fringe Club and Visage one etc and also participated in events like Music Fairground, Peoples Fringe Festival and HK street music etc. He is currently studying in Prins Claus Conservatorium in the Netherlands.

Wong Tak Chung
Wong Tak Chung is currently a local jazz bassist, studied with Tsang Tak Hong 曾德康 who is one of the most famous and versatile bassists in Hong Kong.

In 2007, after Wong was awarded the best bass player in a local youth music competition, he decided to turn his passion for music into a career and finally became a full-­‐time musician.