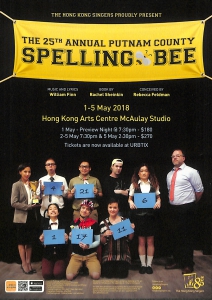 An eclectic group of six mid-pubescents vie for the spelling championship of a lifetime. While candidly disclosing hilarious and touching stories from their home lives, they spell their way through a series of words, hoping never to hear the soul-crushing, pout inducing, life un-affirming “ding” of the bell that signals a spelling mistake. Sweet and shy Olive brings only her best friend (the dictionary) with her to the bee; bold and hyperallergic speller William Barfee uses his “magic foot” to propel him to greatness; former champion Chip is struggling with his burgeoning puberty; easily distracted Leaf is unconvinced that he’s smart enough to be a challenger; overachiever Marcy is disappointed by her consistent success; and politically aware Logainne Schwartzandgrubenierre only wants to impress her gay dads. In hilarious, touching, and catchy songs, each speller reveals his/her hopes, struggles, and passions as they make their way through the competition.

Winner of the Tony and Drama Desk Awards for Best Book, The 25th Annual Putnam County Spelling Bee has charmed audiences across the world with its effortless wit and humour. Featuring a fast-paced, wildly funny and touching book by Rachel Sheinkin and a truly fresh and vibrant score by William Finn, this bee is one unforgettable experience.