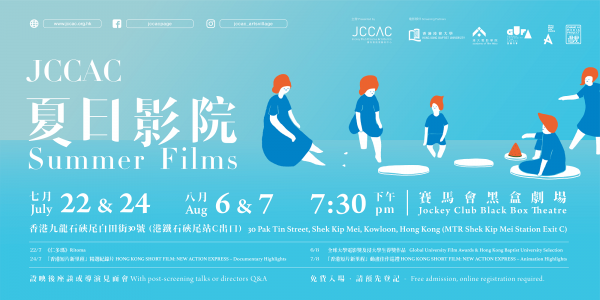 As a witness of the brutal rape and murder of her mother while crossing the border, Ru, 9, is disjointed from reality. She experiences a metaphysical journey while chasing her mother’s memory. This film touches on the larger issue of sexual violence against migrant women and the grief that follows.

A lonely old man in the desert found his dream in his headphones.

Rahaal is an ordinary book like all other books which are existed in Arab world. It tells the catastrophe of the book which is treated badly and carelessly, it also tells the meaningless of reading in our countries at modern times. The film tells the story of the book from its beginning before printing to its sad end.

Freshly graduated and freshly unemployed, Marina, an idealistic fine art student who is living off of her best friend, Wu, struggles to make her meal ticket stay in Hong Kong. So she tries to clear her debt to him by living off of another friend, and this time, it involves a very deadly weapon. A dramedy that follows a toxically symbiotic relationship between two clueless twentysomethings who are too narcissistic to be aware of their cluelessness, adult-ing tells a “staying-their-age” story of people who learn nothing from society but have everything to say about it. Because they are not yet adults, they are adult-ish, and they are adult-ing.

In this short film, the protagonist is Cheung Ka Hei, a secondary six student who attained level two for Chinese Language in the Hong Kong Diploma of Secondary Education Examination last year, meaning that he failed to meet the minimum requirement for the admission of a place in a university. Knowing that he was not able to study what he wanted, he decided to retake secondary six. Pressurized by himself, his mom and his Chinese teacher, along with the lack of support from his only friend, Ka Hei considers committing suicide. He goes to the rooftop of his school after class and is found by his classmate, Sung Hei Man, whose primary school friend committed suicide years ago. The story begins from this rooftop.