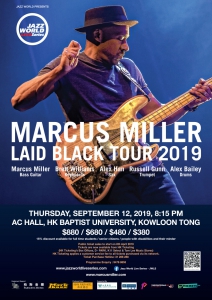 Marcus Miller has been dubbed one of the most influential artists of our time. At the top of his game for over 30 years, he is a two-time Grammy award winner, (U.S.), winner of the 2013 Edison Award for Lifetime Achievement In Jazz (Holland), winner of the 2010 Victoire du Jazz (France) and in 2013, was appointed a UNESCO Artist For Peace. His characteristic bass sound can be heard on a limitless catalog of musical hits from Bill Wither to Luther Vandross , to songs from Chaka Khan, David Sanborn, Herbie Hancock, Eric Clapton, Aretha Franklin, George Benson, Elton John and Bryan Ferry to name a few. Miller has been referred to as one of the most significant bass players in jazz, R &B, fusion and soul. Bass Player Magazine includes him on its list of ten most influential jazz players of this generation.
Miller also left an indelible mark on the careers of artists as varied and talented as David Sanborn, Roberta Flack, Aretha Franklin, Chaka Khan, Al Jarreau, Bob James, Lalah Hathaway and Wayne Shorter. Most notable, after several years of touring in Miles Davis’ band in the early 80’s, Miller developed a close professional and personal relationship with Davis which led to his collaboration on three critically acclaimed albums - the most famous being the ground-breaking album and title song Tutu, making Miller the last primary producer, arranger and composer for this great jazz legend. The album and title song, which Miller composed, produced, arranged and performed on, is widely regarded as a significant addition to the canon of contemporary jazz music. Not only did the album win two Grammy awards, it is considered to be one of the definitive Miles Davis albums of our time.
Artist Website: http://www.marcusmiller.com