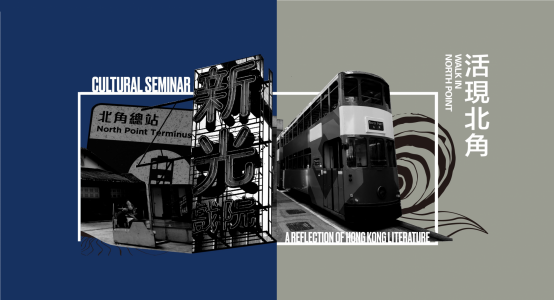 Culture For Tomorrow
Presented by

Walk in Hong Kong
Presented by

Imagination, memories, and historical records could always contribute to what is known for a place. To name, for example, Braemar Hill Mansion, once a poetic place with trees and streams, was already imprinted in the childhood memories within the neighbourhood, even though trees and streams are now replaced with roads and buildings.

North Point, as one of the important landmarks in the Hong Kong literature, inspired local poets to create. One of the many great poems about North Point was even rated as “The first successful local poem with the authentic local flavor .“ It has casted major influence to the other poems ever since. More writers like Liu Yichang, Ong Yi Hing, and Xiaosi are also inspired to record the days and nights in North Point. And now, are we ready to play a tune of a North Point piece together?

Speaker: Professor Chan Wai-ying, currently teaching at the Faculty of Chinese in Lingnan University, worked for the newspaper and TV station. She likes to observe and imagine through wandering in the city, and once recorded her thoughts in her personal anthology and short novel.