Raymond Leung was born with congenital deafness in the right ear. Raised in a poor family with no musical background, he began percussion studies in 1979 with Christine Philip (former Principal Timpanist of the HK Phil) and Jeffrey Pantric (former percussionist of the HK Phil). In 1985 he continued his studies into Western percussion at the School of Music of the Hong Kong Academy for Performing Arts (HKAPA) with Dr Lung Heung-wing, graduating in 1989 and joining the HK Phil as percussionist in the same year.

Besides his activities as a percussion performer, he is also an instructor at the HKAPA, the Chinese University, and the Baptist University. He has spent several summers in Canada, Hawaii, West Virginia University (US), Chicago, Australia, Senegal and Gambia, studying classical percussion, African drumming, Brazilian percussion, steel drum performance, construction and tuning,

He is the endorser of Sabian Cymbal since 2004. 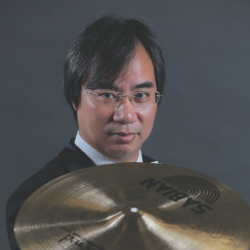