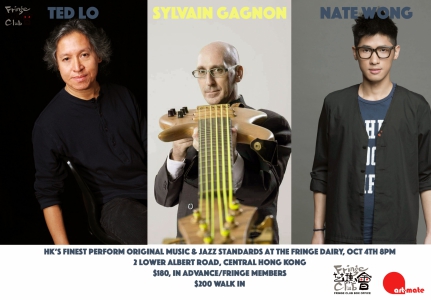 In New York, Lo performed with the legendary jazz artists Ron Carter, Astrid Gilberto, Joe Lovano, and Airto Moreira. In Hong Kong, Ted has worked with many local artists including George Lam, Eason Chan, Jacky Cheung and Justin Lo, and continues to work with local musicians such as Eugene Pao, contributing to the promotion of jazz in Asia.

Wong recently returned from New York City where he performed at various venues around the City including Shrine, RIVAA, Ashoka and kept a busy touring schedule around the World performing at Alfa Jazz Festival in Ukraine, Tokyo Jazz Festival, VR Jazz Festival in Moscow and Euro Jazz Festival in Mexico City. In Hong Kong, Wong has his fingerprints on virtually all parts of the scene as a founding member of the rock outfit Nowhere Boys, original jazz quintet Wong Way Down and as the drummer of Sammi Cheng.

Sylvain Gagnon on bass has participated in hundreds of albums with musicians such as Jackie Cheung, George Lam, Joey Calderazzo, Jeff "Tain" Watt and is widely considered one of the best bass player of his generation coming from Montreal.