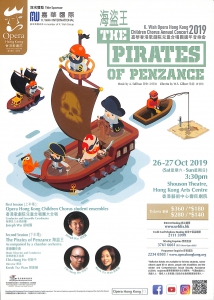 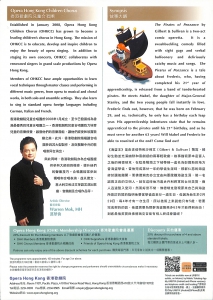 THE PIRATES OF PENZANCEOpera Hong Kong

The Pirates of Penzance by Gilbert & Sullivan is a two-act comic operetta. It is a swashbuckling comedy filled with sight gags and verbal buffoonery and deliriously catchy music and songs. The Pirates of Penzance is a tale about Frederic, who, having completed his 21st year of apprenticeship, is released from a band of tenderhearted pirates. He meets Mabel, the daughter of Major-General Stanley, and the two young people fall instantly in love. Frederic finds out, however, that he was born on February 29, and so, technically, he only has a birthday each leap year. His apprenticeship indentures state that he remains apprenticed to the pirates until his 21st birthday, and so he must serve for another 63 years! Will Mabel and Frederic be able to reunited at the end? Come find out!